Leroy Jethro Gibbs is a special agent in the television series “NCIS.”

A former Marine Corps Gunnery Sergeant, Gibbs has a list of 51 rules.
He teaches the rules to his team and uses them as a framework for conduct both on and off a case.

Rule #9 is:
“Never go anywhere without a knife.”

i have adopted rule #9 and always carry a knife.
i chose a multifunction knife because, like my computer, it can perform many tasks. 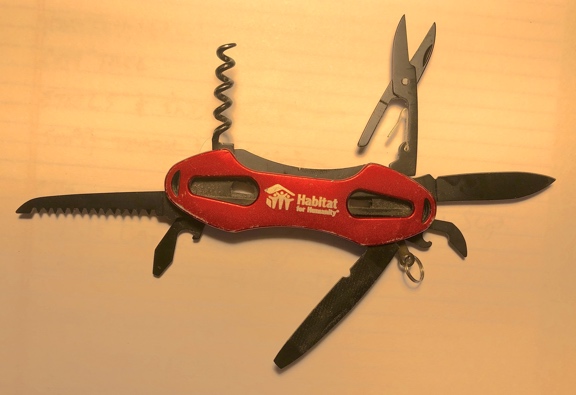 The knife has the following tools: 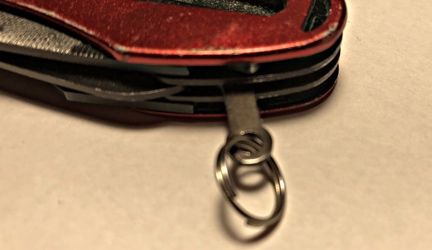 The knife can be attached to a key ring, but i keep it loose in my right front pocket for easy, constant access.

In case i want to do wood working in the wilderness my knife has a saw.

Not just for emergencies, the cork screw has come in handy many times.

Beer is a more common libation than wine in my life. Also, i never learned to open a beer bottle without a church key.

Course on one side and fine of the other, this file keeps my nails manicured. i have also used it to deburr drilled holes and sawn edges.

On the file is a small notch that can be used to strip the plastic off wires.

Like the military P-38, my can opener can open cans. It also works to create a drinking hole. 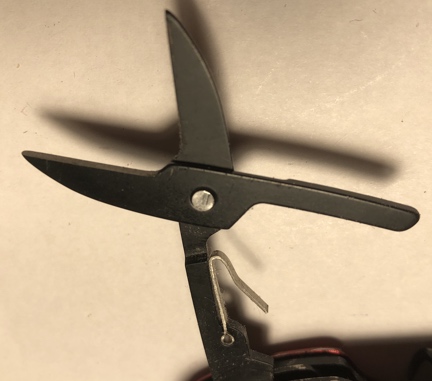 Light weight scissors will cut paper and thin gauge plastic in a pinch.

Open packages and break down cardboard, slice food, remove a splinter, whittle, trim hair, cut someone free of a seat belt in a burning car (maybe not my knife), make a drainage hole in a plastic flower pot, remove staples, cut zip ties, sharpen pencils, shave kindling for a fire, hone another knife, open a bottle cap using leverage from your hand, separate LEGOs, strip or cut wire, line or rope, get a knot out of a rope, make rope out of grass, groom your nails, get zest from citrus, gut and fillet fish or game, open a bottle of wine (the cork screw is easier), prune plants, break glass with the butt of the knife, cut clothes to access a wound, clean a wound, other surgical tasks not listed here, make a new hole in your belt, spread toppings, cut down a tree (if you have a lot of time), remove stickers, pop balloons, open letters, clean a smoking pipe, start a fire (with flint or quartz), cut a fishing net, make a spear, paper weight, shotgun a beer, make pants into shorts, get water out of a coconut, cut tape, stir a drink, open a padlock, scrap off excess glue, bookmark, cut paper, cut pills in half, temporary doorstop, open a spiral keyring, clean corrosion from a battery terminal, various arts and crafts, eating utensil.

Finally, you can defend yourself with a knife.
My small knife can deter an attack with a cut to the hand, stab to the body or a poke in the eye. 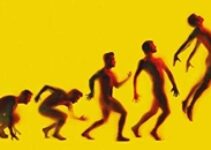 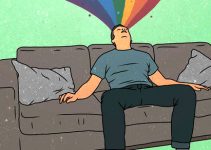